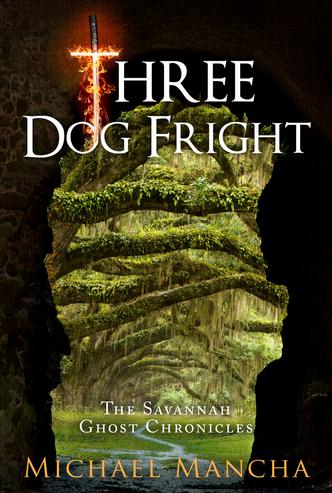 ​​To escape the pressures of life in Los Angeles, the Moon family moves to quaint, antebellum Savannah, Georgia. But it isn't long before the hidden tentacles of The Most Haunted City in America, begin to wrap themselves around the family; especially, twelve-year-old Zachary. Invited for a weekend sleepover at mysterious Black Birch Mansion, Zachary and his new friends, Melody and Sam, are subject to a series of ghostly visitations that culminate with the vanishing of the two boys. As Zachary's parents conduct a frantic search, they learn first-hand about the dangers of venturing into Savannah's dark side. Meanwhile, the Moon's trio of Miniature Schnauzers, Toby, William, and Lily also have an unexpected visitor, Sabrina, a Saluki angel from dog heaven. Given the title of Three Dog Fright, and armed with one weapon, a flaming Sword of Truth, they set out on a quest to vanquish the evil that has plagued the city. As sins of the past are unearthed, and the Moon family comes to realize their destiny, the battle for the soul of Savannah is decided in a frenzied, life or death showdown between three little dogs and the entrenched demonic force!